Megan Martin Salvo started her riding career in South Florida, where she spent most of her junior years showing on the “A” hunter circuit. She was fortunate enough to train with some of the top trainers on the East Coast, including Jennifer Beiling, Karen Flynn, Geoff Teal, and Penny Lombardo. Each of these trainers engrained in Megan the importance of horsemanship and continuing education, which she has carried through to her professional life. As well as competing her own horses and ponies throughout the years, Megan often catch-rode for other owners and trainers. With a small stature, strong leg, and patient attitude, Megan quickly became a go-to rider for green ponies. She rode for trainers such Scott Stewart, Steve Heineke, Bibby Farmer, Jay Matter, Mindy Darst, and Shane George, and earned tri-colors and top ribbons at the Winter Equestrian Festival, Lake Placid, the Vermont Summer Festival, Fairfield Hunt Club, Oxridge Hunt Club, and the Colorado Horse Park. Megan & Rainsprite earned the Grand Pony Hunter Championship at Zone 4 Finals in 1998 and also won the Sportsmanship award at the SFHJA Charity Horse Show/Zone 4 Finals in 2003. That same year she rode Woodland’s First Choice to 10th place in the under saddle at USEF Pony Finals.

After graduating from St. Andrew’s School in 2004, Megan attended Skidmore College in Saratoga Springs, NY, where she graduated with academic honors and a B.A. in English in 2008. A member of the IHSA team, she helped the team clinch the zone championship all four years, which twice sent the team to a reserve championship position at the National Finals. Megan was the top ranked open rider in Zone 1 during the 2007-2008 season and went on to earn 4th place at the prestigious Cacchione Cup at the 2008 IHSA National Finals in Los Angeles, CA, as well as 10th place in Open Flat. It was during her Skidmore years that Megan discovered her love of teaching, when she began helping out with weekend lessons and took an independent coaching equine studies class at the Van Lennep Riding Center. Megan also rode to the top of the Ralph P. Symmes Junior Medal Finals in 2004, clinching the win. She then went on to win the Con Culkan Adult Medal Finals in 2007.

After college, Megan spent two summers as a riding instructor at Camp Nashoba North in Raymond, ME, and was the 2008 Fall intern at the Chronicle of the Horse, in Middleburg, VA. Following the internship, Megan made the decision to revoke her amateur status and took her first assistant trainer position at Pam Hunt’s Cornerstone Farm in Haverhill, MA. In 2009/2010, Megan made the leap to the eventing world by taking a working student position for Shanon Baker in Aiken, SC. She purchased her (then five-year-old) OTTB gelding, Victory, in 2009, and has competed him through the preliminary level.

Megan went on to return to the hunter/jumper world, working as a rider and/or assistant trainer for a few different “A” circuit hunter barns including Mindy Darst’s Lochmoor Stables, Geoff Teal’s Montoga Inc., Wendy Arndt’s International Equestrian Connection, and Sheryl MacLeod’s Turning Point Show Stables. As a rider, Megan has a forward-thinking style and specializing in giving her horses confidence by reinforcing the basics and never over-facing them. With a fun teaching style that emphasizes sophisticated riding, Megan is passionate about helping her students reach their goals. She has coached riders from beginning their show careers through the national finals. Megan has assisted riders in qualifying for and competing at USEF National Pony Finals, Taylor Harris Equitation Finals, USEF Medal Finals, and NEHC Finals. During the 2014 show season she helped coach Devon MacLeod to the win of the Massachusetts Horseman’s Council Junior Equitation Finals, and later helped Devon ride to the 3rd place position at Region 1 Maclay Finals in 2015, qualifying her for the ASPCA National Maclay Finals. Throughout the years, Megan learned more than just riding and teaching skills – with strong knowledge of equine first aid and sports injuries, as well as vast groundwork and barn management experience, Megan can assist her clients in a wide variety of situations. 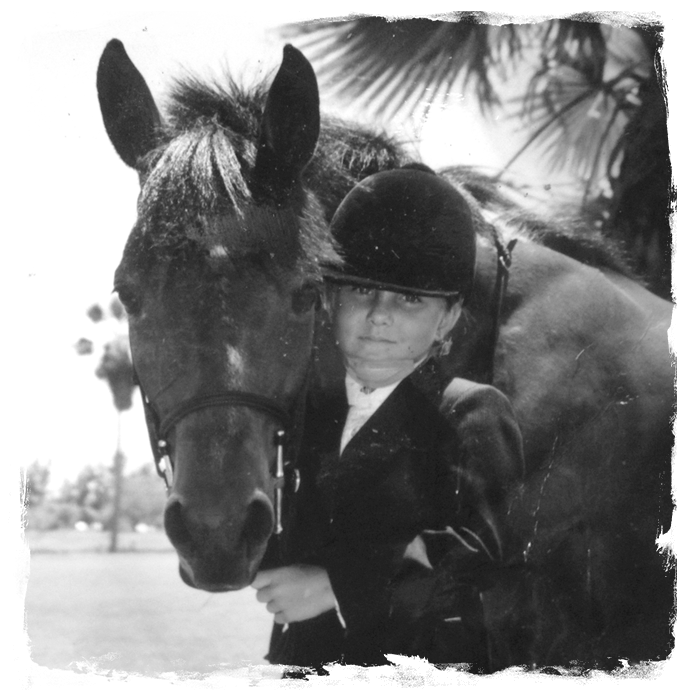 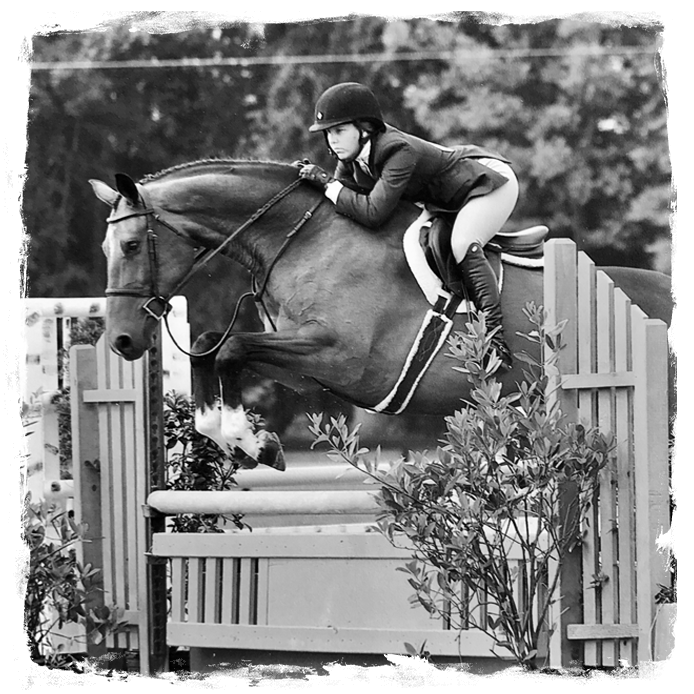 Megan Martin offers a unique training style that emphasizes goal-oriented learning and a strong foundation in the basics of equitation. With the belief that every horse and rider comes from different background and has different needs, Megan customizes her teaching to each partnership. Coming from an “A” circuit hunter/jumper background and then eventing through the preliminary level, she has tried to combine the teachings she learned from each discipline to create a training method that focuses on forward, confident riding where function follows form.

The basics of her training focus on four of the most important concepts for jumping: rhythm, pace, balance, and track. She believes that when a horse is engaged from behind, with a suitable pace, balanced and even rhythm, and a precise track to each jump, the rider does not need to spend time “searching” for distances. Riders need to focus on riding the canter or trot to each jump they approach, and the jumps will present themselves in a timely manner. When riders consistently practice these concepts, they become second nature, allowing the rider to move to higher goals.

Megan believes that solid flatwork is also an imperative part to any horse’s training. Without the strength that comes from a horse working properly during the flatting portion of each rider, they will lack the muscle and balance they need to jump to the best of their ability. Riders must have the knowledge to flat their horses correctly, as well.

When riding and training horses herself, Megan tries to focus on allowing each horse to tell her what he or she needs. Some horses are looking for comfort in the basics, while others enjoy being challenged. Each horse or pony Megan sits on is asked to perform what they know in a polite manner and stretch their knowledge slowly but surely through each following ride. Megan believes in having a soft hand and gentle teaching style for each horse, giving them the opportunity to move forward, have a round jump, and never feel too boxed in. 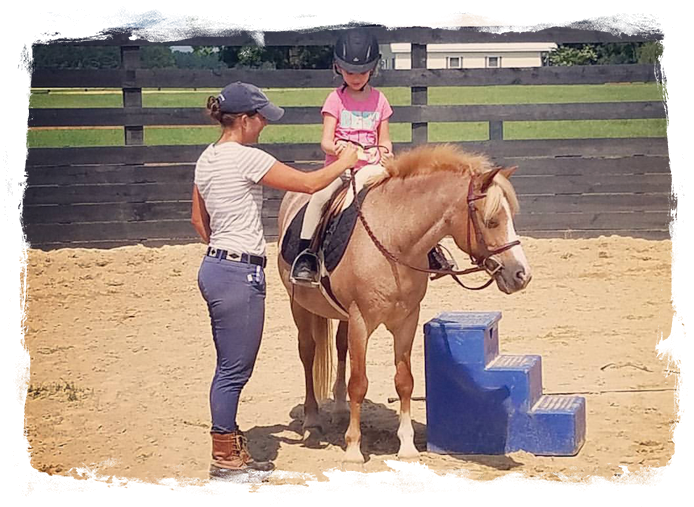 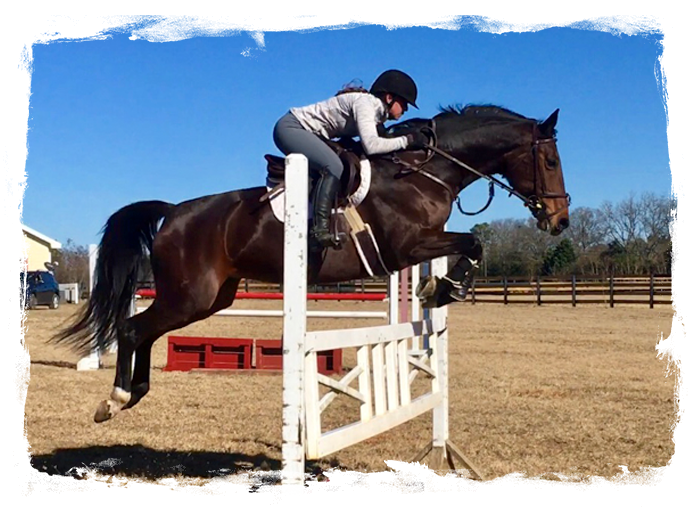 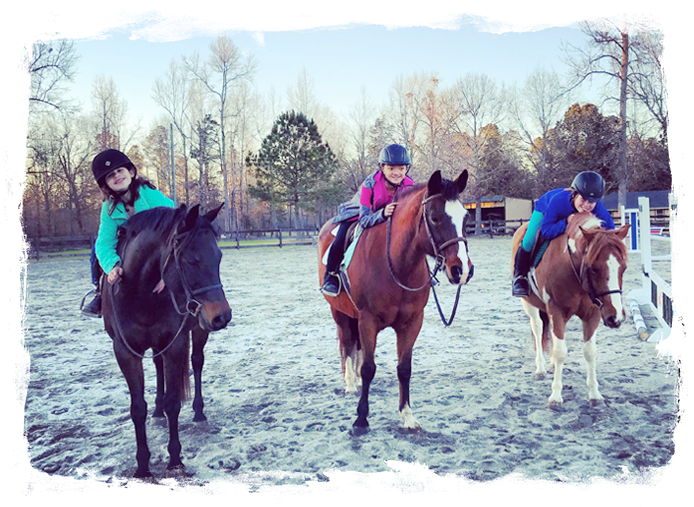